A sweeping climate model of the Red Sea 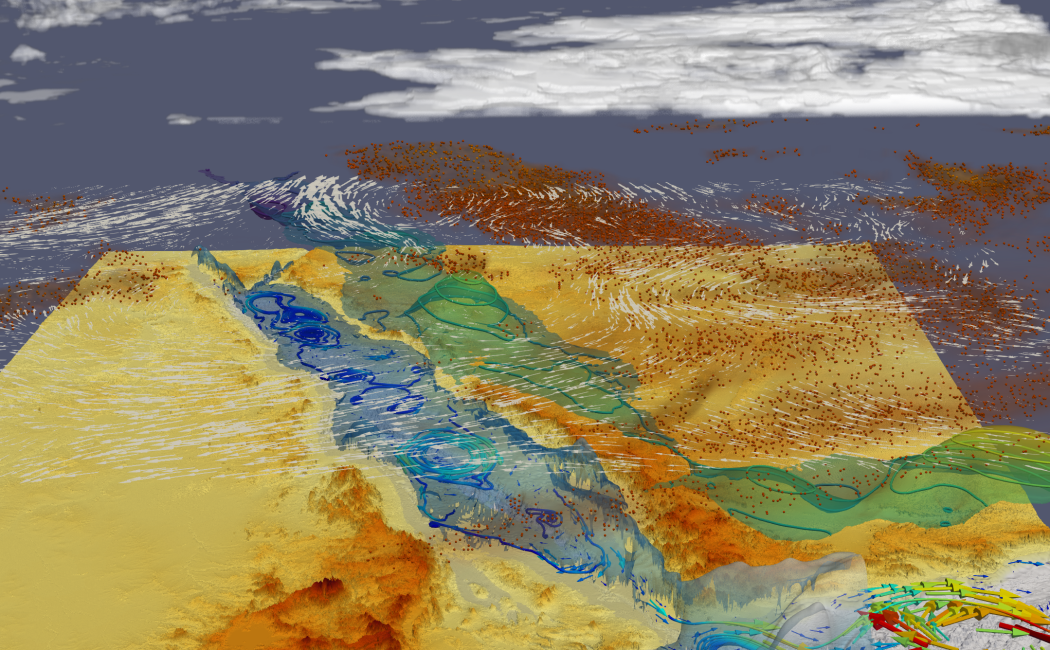 A sweeping climate model of the Red Sea

The Red Sea is a vital natural and economic resource both for the region and the world. Rapid population and industrial growth along its coast, along with the rising threats of global warming, have highlighted the need to build sustainable cities and maintain a healthy marine ecosystem. Saudi Arabia generates nearly one-fifth of its income from tourism, shipping, agriculture and fishing in the Red Sea, and gets 90 percent of its freshwater from desalinated seawater. These industries all rely upon atmospheric and oceanic conditions, which form part of a complex climate system about which very little was previously known.

An international team led by Ibrahim Hoteit, professor of Earth Sciences and Engineering at KAUST, has combined expertise in weather, oceans, waves, air pollution, marine ecosystems and data visualization to create an all-in-one climate modeling system for the Red Sea region, using satellite and surface observations to refine the output. “By building expertise in a region instead of a discipline, we can understand circulation, ecosystems and climate in the Red Sea like never before,” says Hoteit.

The system, which was built on a supercomputer at KAUST, has generated the first high-resolution oceanic and atmospheric analyses of the region for the past 40 years, which has revealed how natural processes in the Red Sea connect with the earth's climate. “We were surprised to see the Indian monsoon’s role in seasonally reversing the overturning circulation in the Red Sea,” says Hoteit. “It has helped explain unusual summer chlorophyll blooms in the southern Red Sea.”

The modeling system can predict numerous processes, including ocean and atmospheric circulation patterns, marine ecosystem behavior, the spread of air pollution and the potential path of an oil spill. This is already providing essential information to academia, government and industry in Saudi Arabia, supporting research into Red Sea biodiversity hotspots, environmental policymaking, renewable energy projects and flood protection. For example, the group's reconstruction of extreme wave heights along the shoreline guided the design of the sea wall that will protect the newly built King Abdullah Economic City.

Hoteit’s team continue to enhance the system’s performance and expand its capabilities, with a particular focus on forecasting at the seasonal timescale and high spatial resolution simulations of urban environments. “We want to turn this into an easy-to-use, online visualization tool to support local authorities and industry in solving environmental problems in the region,” he says.